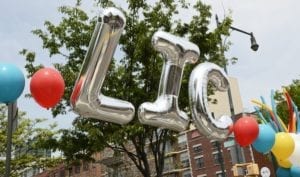 “This is a great celebration of all the great things in Long Island City,” said LIC Partnership President Elizabeth Lusskin. She was talking about this year’s LIC Springs, and she wasn’t wrong: now in its fifth year, the event is a showcase of everything that is right with this swathe of NYC: the culture, the color, the community. And, thanks to Modern Spaces’ presence at the fair, it was also a showcase for the LIC and Astoria condos that are for sale in or near the neighborhood. Here, we look back on the highlights of a fine day that featured more than 100 exhibitors and performers and could not be dampened by the inclement weather.

Councilman Jimmy Van Bramer was in attendance at this year’s fair. And the highly active figure—who is always out meeting his people and tweeting about his beloved Long Island City—had some great news to deliver to all those who had turned out: LIC is officially NYC’s safest neighborhood! No wonder an increasing number of people are looking to buy in Astoria and LIC. The Councilman added: “LIC Springs is a truly unique and fun street festival on Vernon Boulevard that gives neighbors the opportunity to explore and support small businesses, enjoy local talent on the stage and connect with each other over fun activities.” And you can’t argue with that, once you read what unfolded this year.

Organic burgers, cotton candy, and a spaghetti and gelato eating contest were on the menu at this year’s event, while the adults were invited to quench their thirst at the Woodbines pub—renowned for its eclectic offering of craft beer. In front of the pub, traditional step dancing, accompanied by an Irish folk duo, took place—in an afternoon that also saw Bollywood dancers from St. John’s Prep School, salsa from Martinez Dance Studios, plus the Fogo Azul All-Women Brazilian Drumline. If you weren’t boogying, then you weren’t there.

Craziness for the kids

Younger visitors were, of course, the center of much of the activity: while some got their kicks on the free donkey rides, others planted veggies and decorated their own plant pots. Older kids got to break boards, with the help of martial artists from Tiger J Taekwondo, while others were content to marvel at live performances from the likes of Chocolate Factory Theater. It was a chance for families to experience the kind of entertainment they can have week in/week out as residents of Long Island City. Lucky people.

Of course, also in attendance was Modern Spaces—the LIC real estate firm with a genuine passion for its neighborhood and the luxury apartments and condos for sale within it. Over a dozen volunteers helped set up our outdoor living room and made and handed out popcorn, while kids and adults alike engaged in a life-sized game of street checkers. Perhaps the real winner at Modern Spaces, though, was the Bosco GIF photo booth—a big hit among the posers… and those who like to pretend to be shy!